Born in Northern Kentucky and having lived in many different states while growing up, Sarah Kaiser currently lives and works in Chicago. She has a BFA in painting and printmaking from Colorado State University, and an MA in art history and an MFA in painting from the University of Chicago. Her art includes screen printing and etching, and she sometimes combines techniques to enhance colors and textures -- printing on collaged elements (chine-collé) or painting or drawing on prints. 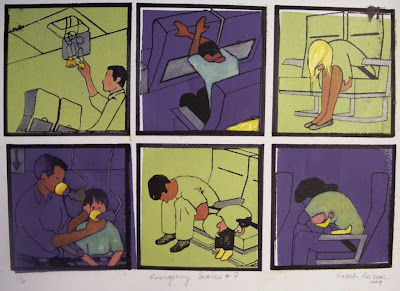 "Emergency Series is from an Emergency Procedures pamphlet I took from the seat pocket of an airplane last year. This screen print illustrates my interest in banal and detached figures; particularly, such images are mass produced with the intent of pacifying the public, and creating the illusion of security. In real life, a person in this situation would never appear so serene, but it was an opportunity to play with the post 9-11 fears of flying as well as the power of images to pacify the public. " 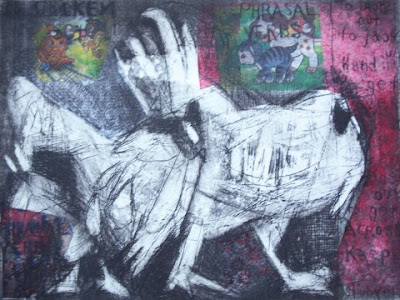 "The image Phrasal Verb Chickens was inspired by teaching ESL. Before I taught art, I taught English. When I taught a lesson on Phrasal Verbs, which are two-or three-word verb phrases, the students thought that 'chicken out' was funny. They told me other idioms in Spanish, such as a Mono con cuchillo (Monkey with a Knife). In Spanish, this means a person with a credit card. The lesson got really interesting when we approached all of the 'get' verbs -- get off, get out, get on, get up, etc. One of the students knew the alternative get off' meaning that pertains to masturbation...so I had to explain the concept to the rest of the students. Needless to say, it was a bit awkward to do so."

For more information on Sarah and her art, go to http://sarah-kaiser.com/.
Posted by Amy A. Rudberg at 12:01 PM

Your work is strong, Sarah. I also went to your website to see the range of your talent, and focus.