For many years Bert Menco led a dual existence as a neurobiologist during the work week and as an artist / printmaker at night and weekends. Retired from his biomedical profession from Evanston's Northwestern University in 2006, Bert has confessed that the discipline needed in research is also used in his art. Many of his drawings, prints, and paintings are elaborately detailed, and sometimes take months of work to complete. Since the early 70s, Bert has been studying printmaking and making prints in the Netherlands, where he was born, England, and in the US at the Evanston Art Center and the North Shore Art League in Winnetka. With themes ranging from dream states, fantasy images, and mythological icons, his printmaking techniques include etching, mezzotint, drypoint, and chine-collé. 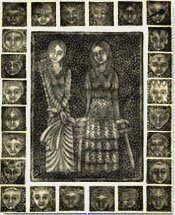 Influenced by Dutch / Flemish art from the 1400s to 1700s, as well as artist colleagues in Chicago, Bert believes his works combine a certain poetic narrative with a mysterious element. He believes that his images sometimes convey to the viewer their innermost thoughts and feelings.

"My images tend to deal with confined spaces containing certain characters that reach out to one another but do not quite succeed in meeting, hiding behind reality, masking yourself, or trying to show with the mask how you really feel. Maybe one's 'normal' face is really a mask?” 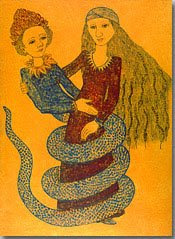 For more information on Bert and his art, go to http://www.bertmenco.com/.
Posted by Amy A. Rudberg at 2:18 PM