As a new "Inky" member of the Chicago Printmakers Collaborative (CPC), I will be blogging in November and December about the CPC's Small Print Show and interviewing some of the participating artists in the show. My friend Deborah Maris Lader established CPC in 1989 and has held a Small Print Show every year since that time in the CPC gallery and shop. The show will feature the art of 50 US and international artists. 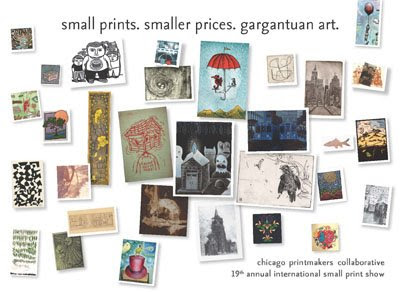 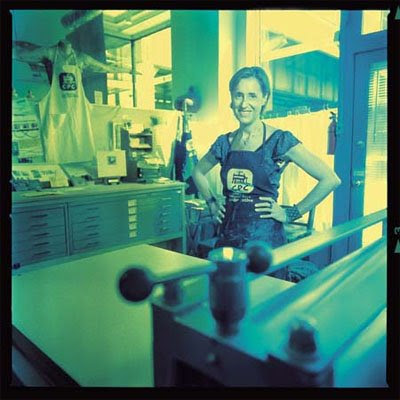 Reprint of an interview with Deborah Maris Lader in ArtStyle Blog, A Voice for Artists in Chicago, May, 2007.

nuthatch-4. Courtesy of the Artist.

ArtStyle: How did you get into printmaking?

Deborah Maris Lader (DML): I started my own education in sculpture. I think part of the reason I liked sculpture was because I love materials, and then I discovered printmaking. In printmaking, you use stone, wood, and metal, but it also involves drawing. So early on I decided that I was going to be a printmaker. No matter what medium I’m using, I’m still thinking like a printmaker.

ArtStyle: Why do you work with so many different kinds of media?

DML: Every time I have a new idea or something I need to express, I’ll try something different because it may not be appropriate to express the idea in the medium in which I was previously working. I like to experiment with materials. I just use whatever I think I need to express whatever I’m trying to say at that moment.

ArtStyle: You mentioned that you collaborate with your older son in creating animal collages.

DML: I did a series of animals with my son, who has Asperger’s Syndrome, which is on the high-functioning end of the autism spectrum. At fourteen, he’s an expert on all things about animals. In this particular piece (giraffe), I gave him the wood, and he wrote about giraffes. He took a photo of the giraffe at the zoo and drew these images. And then I collaged them on the board and painted over it. A lot of my work is about him as well as the process of creating and thinking in different ways. As an artist, I’m like him in some ways because it’s our job to see things differently from other people.

giraffes. Courtesy of Daniel Silver and the Artist.

ArtStyle: Could you talk about your etchings?

The etchings are interesting because the images featured in them come right out of my head on to the etching plate. There’s no over-thinking involved and they’re a lot of fun to create. They’re created in a stream-of-consciousness fashion. Although the themes are different, there are a lot of musicians because I happen to be one. I do the etchings in black and white and then hand color some of them with watercolors.

The 3” x 3” copper etching plates can fit in my purse. I have to be busy with my hands all the time, so this was a convenient way for me to put whatever was in my head on to the pre-grounded etching plate. It’s a good way for me to calm my brain down a little bit and get the images out, like putting the ongoing movie in my head on “pause.” Usually I draw first and then put the words in as I go. The words have to be drawn on backwards in order for them to print forwards and be readable. Writing the words backwards somehow gives the lettering a naïve feel, and I like that. An etching is like a narrative because it starts with something but it morphs into something else.

motherhood. Courtesy of the Artist.

ArtStyle: How do you create the photographic oil paintings?

DML: A lot of these images are coming from dream sequences. I’ve tried to assemble these as if I’m assembling a dream. I print out all these images on the computer, and I just start combining them in different ways that only make sense to me. I layer them and draw under and over them, and then I paint. The series really started with the boy flying or trying to fly. My son did a science project on why boys can’t fly.

why boys can fly2. Courtesy of the Artist.

ArtStyle: What other art are you thinking about for the future?

DML: Right now I have an idea of these really large pieces, and using plaster with more color.

ArtStyle: Could you talk about how you started the Chicago Printmakers Collaborative (CPC) and how it’s changed over the years?

DML: I was teaching printmaking at Indiana University at Fort Wayne, and I met my husband here in Chicago. I moved to Chicago and checked out all the teaching opportunities, and it was very limited. At the same time, I was looking for a print shop to work in. In 1989, all the print shops had disappeared by that point. And then I saw a print shop for sale in the Chicago Artists Coalition newsletter.

I didn’t necessarily set out to run my own print shop. It just seemed that Chicago needed an independent shop at the time, and all the pieces fell together for me to be the one to do it. It worked out perfectly because I bought the remnants of an old press shop called Hard Press Editions and the nice thing was the guy who sold it to me wanted to keep everything intact. The original shop in Ukranian Village was a second-floor walk-up in a warehouse building, and there was no elevator.

The first thing I did was I bought this new lithography press(I call this press Edith because my grandmother had just passed away and she was one of my favorite people in the world). And my grandmother had left to me in her will the exact amount of money I needed to buy and ship this press. I thought it was kind of a sign. The press over there was the original Dickerson, the first and only press I had when I first moved in.

The place had beautiful light but it was in a really old building. It was in need of a lot of work. I moved into that space and stayed there for roughly nine or ten years. Initially my studio was the size of a closet. Although there were other artists on that floor, I ended up taking over the whole floor for gallery and more work space. After ten years, the landlord decided -- it was getting very gentrified in that area -- that he wanted to rent it out as an apartment and get a lot more money for it. And so we moved here to this location and we’ve been here for eight years.

ArtStyle: How do you manage this print shop?

DML: For the print shop itself, I intended to run it like a university shop but at a higher level. The printmakers working here would all be professionals, and they would pay a monthly fee and they would all have key access. It’s been that way from the beginning, and it has worked out really well. I have always had interns to help run the shop, and I used to have an assistant director, who got a studio space in trade for her work with the CPC. It was then I could afford to take off a couple of months to have my babies, knowing that the shop would be fine, and I could kind of monitor it from home.

Courtesy of the Artist

ArtStyle: Do you offer classes here?

DML: We used to offer lots of group classes but now we only offer private classes and an occasional group class, mostly master classes or intensives. We’re having a week-long intensive class in etching July 9-13, which meets every day, all day for the week with added weekend hours. And these intensive classes have been really popular. We also teach classes through the MCA where some of the classes are at the MCA and some are at the CPC. I enjoy the partnership with the MCA and Gallery 37 and similar programs in order to provide classes and opportunities for people.

What started to happen with the group classes was that every single night of the week we would have these huge classes in here, and our artists who are paying to use the studio every month, especially those who are working 9 to 5 pm, had a hard time getting anything done. Now that we have less of the large groups and more private classes, which can be taught right along with people working in the shop, we have way more people who are using the print shop on a monthly basis.

Courtesy of the Artist

ArtStyle: Who are your resident artists?

DML: We have six resident artists and they’re on a minimum six-month lease; some of them have been here quite a bit longer than that. That’s been really nice because you always have a certain number of artists who are always here, committed, and working in their private studios just adjacent to the printmaking workshop.

ArtStyle: Are you nonprofit?

DML: We’re not a nonprofit, which also makes us pretty unusual in the world of print shops, which are usually run as nonprofit studios. I certainly looked into nonprofit status at the beginning and was ready to get 501(c)3 but at the time, there was all of that weird censorship stuff, which was happening about 1989. It was happening in Cincinnati, even here in Chicago, censoring art work, along with that whole thing where board members were imposing their own tastes on museum shows and everything else.

When we moved to this space and it was more expensive, we had this build out, and we had all of these things that had to happen. I started losing money. The loading dock was a dedicated gallery space. After a few years, I closed for the only month I’ve ever been closed, and I fixed everything that needed to be fixed, raised the prices, and then built four artists’ studios on the loading dock where the “gallery” used to be, and then everything made more sense. I moved the gallery to the main workshop. We always called it the workshop/print gallery anyway. The idea being, as you walk into the space, people are making prints while the art can be seen on the walls. It is a professional space and that’s what I want it to be here.