Describing himself as a "non-professional artist but a hard-working one," George Bodmer creates whimsical etchings based on his imaginary characters. Born in New Jersey in the late 40s, George currently teaches at Indiana University Northwest, where he is the Chair and Professor of English in the College of Arts and Sciences. He is the author of numerous articles on illustration in children's literature, with a focus on Dr. Seuss and Maurice Sendak.

George Bodmer's take on Dr. Seuss' book A Cat in the Hat: "A brother and sister are stuck home alone on a rainy day; a stranger comes to the door and offers to solve their problem. Though the goldfish tells them they shouldn't let strangers in, they admit the Cat and he wreaks havoc on their home, knocking things about and generally making a mess. At the very last moment before their mother returns, the Cat uses his invention to pick up everything and restore order...It's a book that knows we don't always behave." Reference: IU News Room, Indiana University, Nov. 13, 2008. 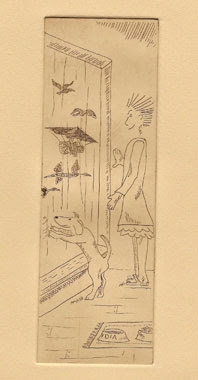 "I have always drawn and am attracted to the added dimension printmaking provides. Printmaking is a way of making the simple act of drawing as complicated and error-prone as possible. I usually begin with the idea of an image, such as ostriches or a farm house, and slowly 'gather' details to add to the picture. This sometimes results in unusual juxtapositions such as ostriches and typewriters, or Spanish galleons and skateboards, but it provides a narrative component to the print."

For more of George's art, please visit http://www.iun.edu/~enggrb/art/. He can be contacted at gbod17@earthlink.net.
Posted by Amy A. Rudberg at 2:18 PM