Layne Jackson runs a full-service design studio, providing fine arts, illustration and teaching workshops to businesses. Born in Texas and educated in Toronto and Ontario in Canada, and the University of Texas at Austin, Layne worked as an art director for a magazine in France and a newspaper in Texas, and as a designer of collateral materials for a computer firm. Her teaching includes mural projects with over 1000 school children and art classes for hundreds of adults. She currently provides creativity workshops for businesses by bringing in art directors and artists to hold workshops for "right brain thinking." 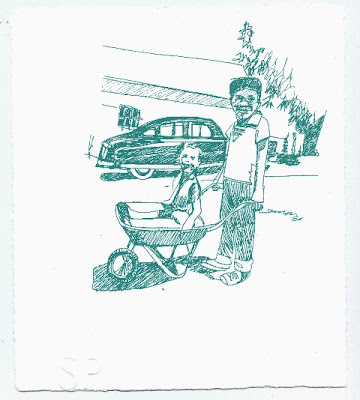 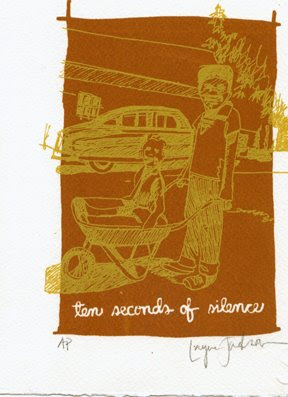 "I have newly come to printmaking as a way of increasing the possibilities of my narrative work. I have several hundred pen drawings and am using them to create silk-screen statements. A new project 10 Seconds of Silence came about due to a lack of quiet in the world, and the realization that the snapshots that I've collected and worked with for twenty years were created in about '10 seconds of silence,' the time it took to pose and snap the shot."

Layne has a storefront gallery at 1941 W Division Street, opened Sundays 1-6 p.m., by chance or by appointment. For more information on Layne and her art, go to
http://www.laynejackson.com.
Posted by Amy A. Rudberg at 2:50 AM