Here are five paintings I did for the Endangered Species Series I, which will eventually be included in a book about endangered species. I'm selling limited edition giclées (high resolution reproductions) at Lakeview Art Supply in Chicago. A percentage of the profit earned from the sales of the series will be donated to the nonprofit organization SavingSpecies.org, created by Dr. Stuart L. Pimm, 2006 winner of the Heineken Prize for Environmental Sciences, the Nobel of the ecology world. SavingsSpecies.org uses donated funds for the conservation of land to mitigate the destruction of the natural habitats of endangered species. 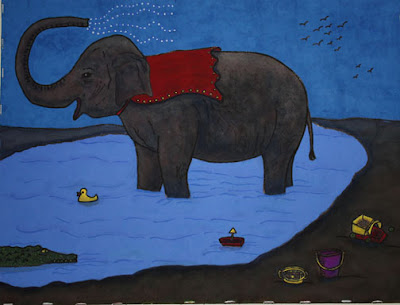 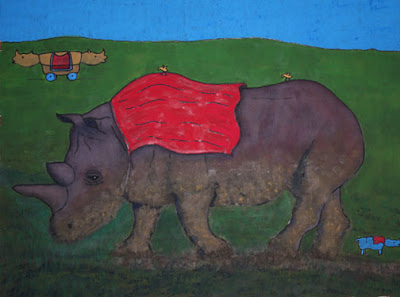 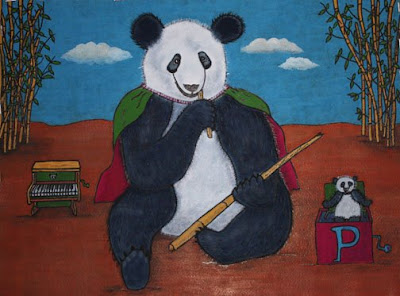 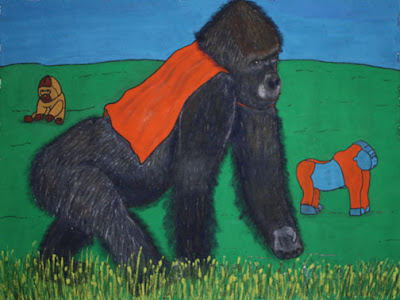 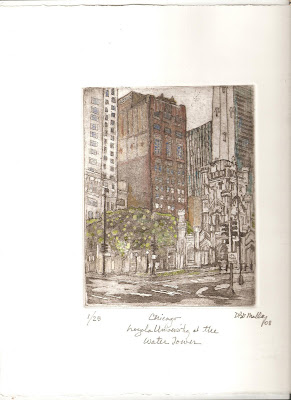 An admitted lifelong lover of the city of Chicago, Dennis B. O'Malley is a printmaker who focuses on Chicago landscapes. In 1995, he was introduced to printmaking at the Chicago Printmakers Collaborative and has been working there ever since. His printmaking generally involves etching with watercolor and chine-collé. 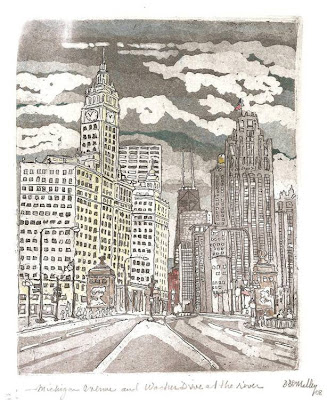 "Printmaking concentration can be in intaglio printing, monotypes, Polaroid transfer. I seem to gravitate especially to the etching process, a form of intaglio printmaking, which began in the Middle Ages and was popularized by Durer, Rembrandt and James Whistler. Intaglio printing refers to lines etched or drawn into the surface of a metal plate (either zinc or copper). The plate is dipped in acid, which etches the lines into the plate. Ink is rolled over the plate and then, the plate and paper are run through the press, transferring the ink to the paper. Etching produces special aesthetic results because of the various choices of papers, inks, and printing techniques. I usually finish my pieces with watercolor and chine-collé." 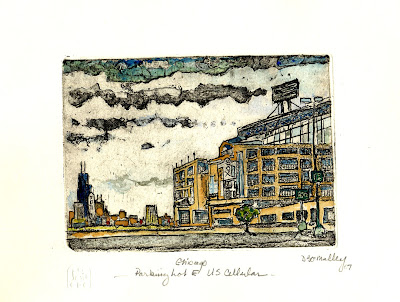 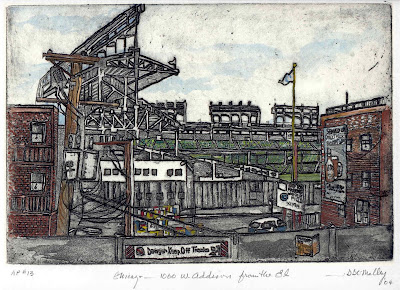 For more information on Dennis and his art, go to http://www.dennisbomalley.com.
Posted by Amy A. Rudberg at 11:20 AM 1 comment:

This blog is part of a series about participating artists / printmakers in the Chicago Printmakers Collaborative Small Print Show. 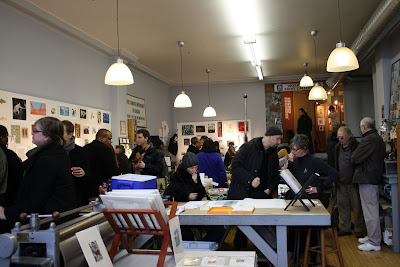 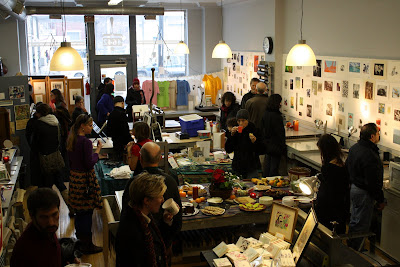 Today and tomorrow, Dec. 7th, 11 a.m. to 7 p.m., the CPC will be celebrating the grand opening of the CPC Small Print Show. The great thing about the opening is that you can meet a lot of the participating artists, who would be glad to answer any questions you may have about their work. The following artists were at CPC today when I was there this afternoon. 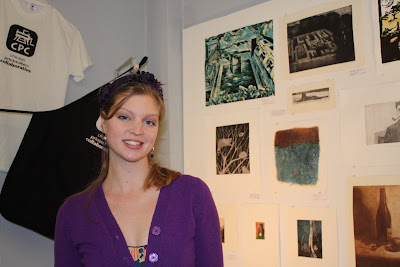 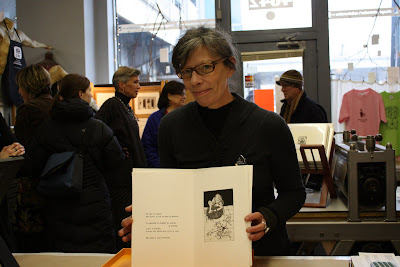 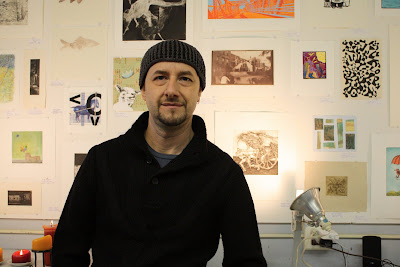 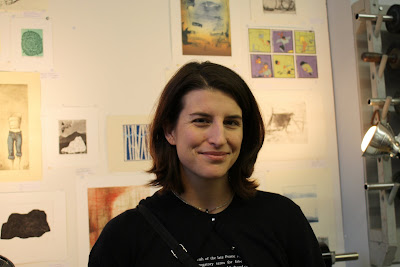 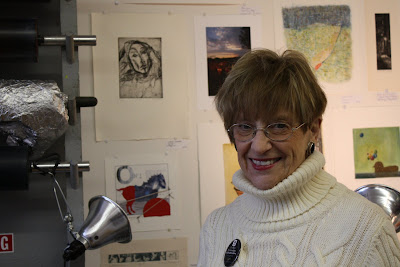 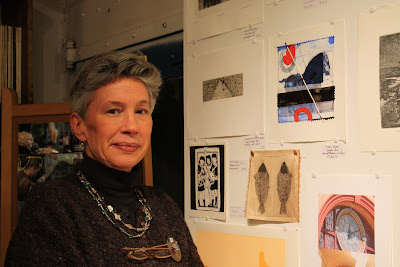 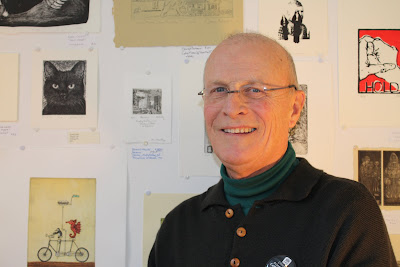 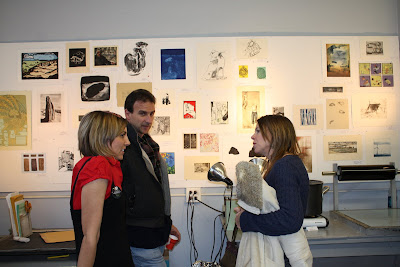 Megan Sterling (left)
Posted by Amy A. Rudberg at 6:07 PM No comments:

A life-long Chicagoan, Ruth Moscovitch recently moved with her husband to the New York metropolitan area. A founding member of the Chicago Printmakers Workshop in the early 1970s, a former attorney, and a printmaker, she currently works with two New York printmaking groups -- the Manhattan Graphics Center and the Robert Blackburn Printmaking Workshop. In her prints, she tries to capture the visual landscapes of Chicago and Manhattan, and the industrial landscapes of New Jersey. She uses traditional etching techniques, including intaglio, aquatint, chine-collé, soft and hard grounds, drypoint, and spit bite. 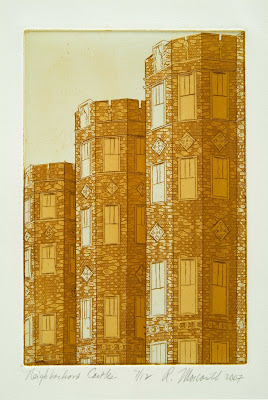 "I love vintage buildings and water towers. I use subtle colors and textures to express the feel of old bricks and stone including old lace curtains and other fabrics and even Bounty paper towels. I like the whimsy for example of a terracotta Greek temple sitting atop a dinghy old commercial building or the fanciful details that make an ordinary apartment building seem like a fortified castle. I also like buildings that have been recycled: the bank that is now a community ballroom; the elegant façade that now houses a currency exchange. The other landscapes that draw me are the vast open spaces near these cities. Riding the train into Manhattan from New Jersey, I am fascinated by the open wetlands, dotted with bridges, decaying factories and marching columns of towers carrying high tension power lines. In Illinois, there is the flat, flat prairie, where barns and silos, instead of tall buildings, dominate the view." 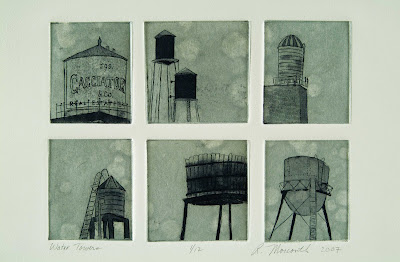 For more information on Ruth and her art, go to http://www.ruthmoscovitch.com/.
Posted by Amy A. Rudberg at 3:45 PM No comments:

I first interviewed Michael Goro for ArtStyle Blog in October, 2007. Born in St. Petersburg, Russia, Michael studied architecture at Leningrad Academy of Art and Design, eventually moved to the US and received an MFA in printmaking from the University of Illinois at Urbana-Champaign. He currently teaches at the American Academy of Art in Chicago, where he is responsible for drawing and design classes as well as for developing the printmaking program. His intricate prints include the full spectrum of intaglio printmaking techniques, ranging from Renaissance engraving to digital photogravure. 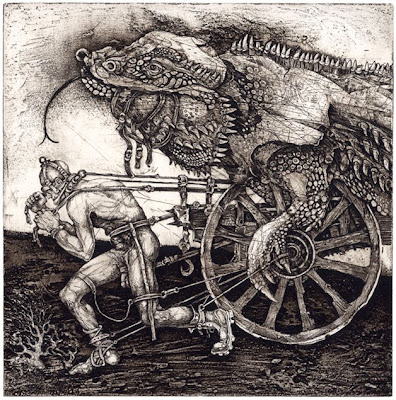 "My art is a continuous creative search for raw authenticity in urban environments and human forms that are constantly changing. Individuals change as they experience life and cities develop and/or decay through time. People and places have history and experience. Cities are weathered by time and through use, taking on a personality of their own from the people and the elements that have interacted with them. It is a combination of all of these factors that creates authenticity.

"Looking for subject matter I find simple things that we see every day, things that become symbolic once they are taken out of context. I experiment with the juxtaposition of places, faces, and architectural designs that reflect my diverse personal experiences. My story is a vivid illustration of the end of the last century, a time of deconstruction, discontinuity, and dislocation.

"I find that black-and-white prints convey contradictory images better than any other medium by reducing them to the most basic color contrast." 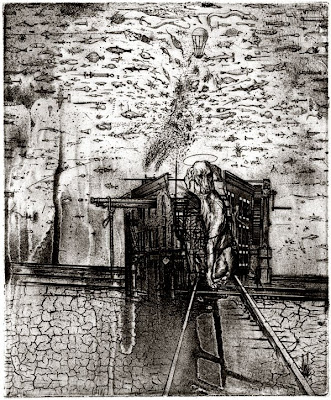 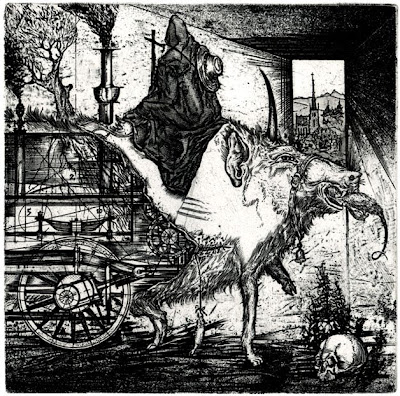 For more information on Michael and his art, go to http://www.mgoro.com/.
Posted by Amy A. Rudberg at 2:43 PM 1 comment: