A New Life for Still Lifes

Although I mainly do illustrations, sometimes I think about doing still lifes. Why paint inanimate or motionless objects such as fruit or flowers on a table when you can paint people, animals, and landscapes? I think that if you learn to paint representational still lifes well because it takes so much skill, concentration, and attention to detail, you should be able to paint just about anything. I've discovered that your subject matter is not as important as your ability to embue your art with subliminal emotions, memories, and energies. When I think of modern still lifes being able to convey these qualities, I think about the art of Susan Kraut. I interviewed her for an article I wrote in November, 2007, for Chicago Artists' News, which is no longer being published by the Chicago Artists' Coalition. Here is the entire article. 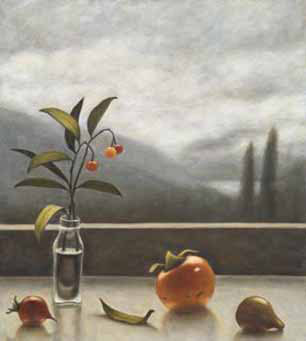 About two and a half years ago, Susan Kraut spent a month in Bellagio, in northern Italy on the edge of Lake Como, intently observing the sloping earthy landscape with fruit-laden trees, the heavy white-gray clouds floating on mountain tops, and the blue-green serenity of the sky – but above all, painting what she experienced, trying to capture the essence of that particular moment of time.

In her Evanston studio, Kraut surveys her latest series of Italian still life paintings currently under way, and comments, “These were done when I returned from Italy. I start with little studies first before I do the actual paintings. These [objects in the paintings] are all things I found there – persimmons, pomegranates, pears, leaves. I always work on many paintings at once. These are all in various stages, some closer to being finished. I’ve been working on the Italian series for over two years now.”

Kraut reveals that in her youth, she could not draw, so she never considered going to art school. Instead she majored in English literature and then went into education, but she felt she was a failure at teaching a classroom of children. In her mid-twenties, she tried social work and then finally decided to take some art classes, and thought of becoming an art therapist. She took a figure drawing class and realized that she could indeed learn to draw the figure. For Kraut, drawing and painting something realistic was magical. She contemplates, “If I can paint something and it looks real, such as capturing the exact quality of light as it falls on the skin of a pear, I’m thrilled. I think that’s the reason I’ve never had any inclination not to paint from real life. I have to see it in the world and then I fall in love with it and then I paint it.”

On surveying the Italian series, the viewer can see that Kraut allows the objects in her oil paintings to interact with one another by playing with light and shadow, to reveal the ripeness of their lives with glowing colors and textures, and to provide a natural setting for them to interact with the observer. All at once, the still life comes to life, and the viewer is startled by the recognition of a memory of a similar scene somewhere in the past. 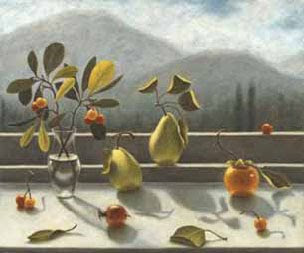 In the beginning, Kraut painted figures, which were her first love. She put figures in a room so there was a narrative taking place, and then she started removing the figures and just painted the rooms. She delighted in painting interiors with light coming through the windows, trying to capture a certain moment of daylight. She had visited a Vuillard show at the Art Institute and was inspired by the artist’s depiction of small, intimate interiors. Her paintings started to evolve from an emphasis on the room to the objects in the room, particularly the objects in front of windows. At a certain point, she moved closer and closer to the objects. She never planned it that way. It just happened over time.

She ponders why she likes to paint still lifes today. “When I taught at Ox-Bow, in Saugatuck, Michigan, across the lake from Chicago, I began to be interested in the landscape seen from the windows of the little cabins where the faculty and staff stayed. If I went into other artists’ cabins, I often noticed their sketchbook or coffee cup. For several years, the subjects I painted included my own coffee mug or my sketchbook. So those were a little more autobiographical because they were my objects – it was somehow me in that space.
“Maybe the paintings I do now aren’t about me,” Kraut continues, “but the objects are representative of me. I was there, observing those things. I like the stillness of the still life. I have always thought that painting can capture stillness, something that you just see at a moment. I want the object to look natural, sitting casually on the window sill, perhaps half natural and half composed.”

Working methodically in Italy, Kraut found her objects, took photographs of them and the landscapes, painted a series of studies of the objects and the backgrounds, and then started to paint her first series, all while on location. Like the old masters, she begins by applying a reddish brown underpainting to her canvases and then blocks in the forms, indicating the lights and darks in her composition. She works and re-works the painting in thin layers of colors, sometimes using 30 or more layers of paint, working simultaneously on different paintings to allow the paint layers to dry. She continually struggles to capture exactly the hazy, cool light from cloud-filled skies, and to allow the glow and warmth of the still life forms to come through.

In a work-in-progress in Evanston, she is experimenting with layers of texture, light, and shape. She has some water spilled on the table among the other objects. She is studying how light is reflected in the water and how the surface tension provides a certain dimensionality to the painting by the way it echoes the water in the vase and the lake in the background. There’s a leaf with a hole in it and light comes through, and the little red berries echo the hole in the leaf. The glass vase filled with water, the clouds, and the surfaces by the window sill reflect light from the sky.

Kraut indicates that she would like her paintings to be “meditative and contemplative, because everything in our daily lives is so fast. I think oil painting is about stopping and slowing down and just looking. The paintings I have always liked best are ones that you look at over a period of time and that stay with you, like a classic Vermeer. It’s all there in front of you but it’s mysterious, the light is tangible, and you are confronted with something beyond the mundane objects described. My goal is to create something that just slows you down and gets you to really look at the world.”

Kraut’s paintings reflect a serenity, a satisfaction with where she is in life. She’s happy to have gone through all of the experiences that she’s had, and now she wants to share that serenity with the viewer.

Susan Kraut is represented by Addington Gallery, 704 N. Wells Street, in the River North area. She is scheduled to show her new Italian Still Life series this fall, starting November