It just so happened that on the day I was going to visit Judith Roth at her studio, I had a flat tire, so I had to take a cab to my class at Lillstreet Art Center at Ravenswood and Montrose. After class, I thought about walking to Judith's home / studio, located at Irving Park Road and Larchmont, about a quarter of a mile away. I called Judith because I couldn't get a cab right away, and she graciously volunteered to pick me up. She drove to her condo building, which was previously a clock-tower factory owned by Bell and Howell. After parking her car in the garage, we walked to the front of the building, took the elevator, and entered her 2500-sf loft space -- divided into her living space and her studio. Looking out from her large windows, I could see a spectacular view of the city skyline in the distance. Entering a doorway with a sign on the door indicating "Employees Only," we were at the entrance of her office / computer area. Another doorway led to her expansive studio space. 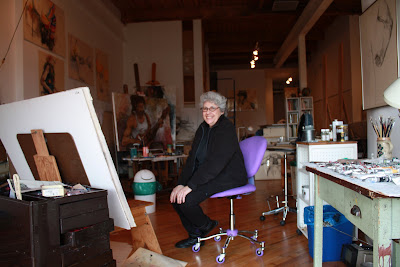 Near the windows, on the south wall, there was a pile of sketch books on a small table. Judith said she likes to do graphite sketches of figures across two pages in these books. Next to the sketching table was a platform for a figure model to sit and pose. Judith set up her bench and taboret to do pastels on paper in front of the platform. On the north wall, Judith set up a table with brushes and oil paints. In the middle of the studio, she has a painting table and three easels for her canvases. The rest of the space consists of storage area for a lifetime of work, a sink, and a large bathroom. Although she has a lot of light coming in through the windows from the southern exposure as well as from her studio lights, she said she would like more -- preferably daylight warm / cool flourescent overhead lights -- and a strong, adjustable overhead spotlight above the model stand. She also wants to construct a slightly tilted moveable wall about 6' by 10', on wheels, to tack on large sheets of drawing paper; a larger model stand; and a Victorian sofa. 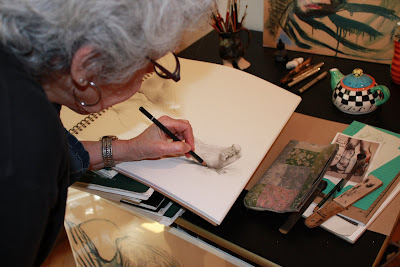 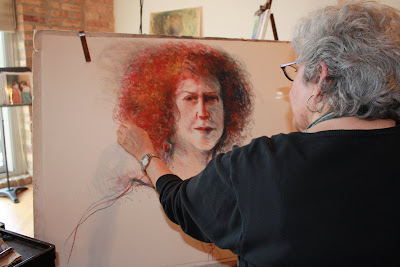 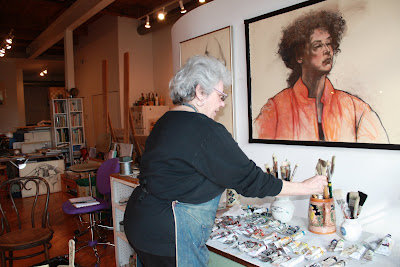 "I just love being here: the ambience of this old building, the size of the space itself and the height; the views of the neighborhood from my windows and being set between two sets of tracks -- the Metra on the east and the Brown Line just to the west -- where I can watch the trains coming and going and see the city itself in the distance while maintaining a neighborhood feeling. It is having the best of both worlds: trains, houses, trees, birds singing in the summer, seeing both the sun rise and set because of the southern exposure's broad panoramic views; fireworks blasting off all over the neighborhood on the fourth of July and New Year's Eve; the world covered in snow on wintry days, and nights all asparkle, seen from my balcony's fourth floor 'penthouse' just high enough to get a great overview, yet low enough to feel in the midst of whatever is going on outside." 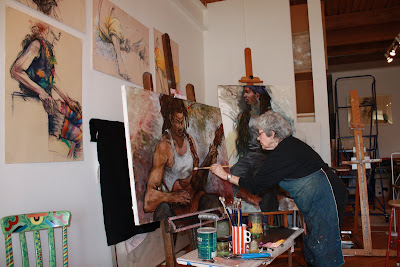 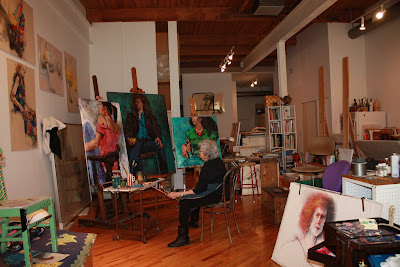 "I sometimes hire a model here in my studio, sometimes sharing the model fee with one or two other artist friends, but had also been doing much of my work over the years at the Figurative Art League (FAL) in the Noyes Cultural Art Center, Evanston, because they were one of the very few studios offering 3-hour, 4-hour, 12- and 16-hour poses over two-week periods in interesting settings and at a very reasonable rate."

"At Noyes I had also shared studio space with portrait artist Richard Halstead for about ten years until I bought my present loft space. However, the sense of community with a group of like-minded artists such as that at Noyes counteracted the isolation of solitary work as well as the expense of hiring and arranging for models. They (the FAL) have recently disbanded after about 30 years, much to my sorrow and sense of loss. They are presently trying to get an article published, describing their history and evolution, since the days when the great figurative painter Fred Berger founded it. This would also be an interesting and important group to document, if only for the historical and archival importance of its existence and now it's passing." 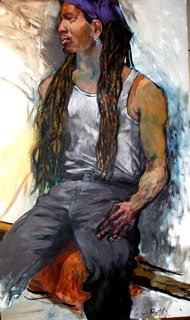 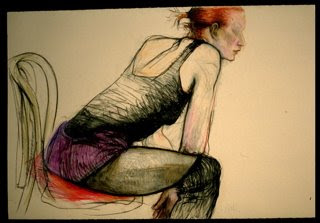 "I am involved with the precarious balancing of realistic and abstract expression. When successful, they intensify each other, the one drawing you into its illusion of depth, weight, and the raw grace of human form; the other making you dramatically aware of the process of paint and drawing materials being moved about on a two-dimensional surface." 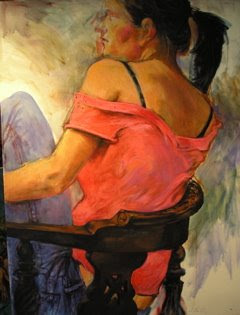 "Sometimes my work is concerned with very controlled modulated tones, carefully and slowly built up with a wide range of graphite sticks and dramatic use of negative or open space. Another body or work was developed in mixed technique, utilizing pastel, chalks, oil crayon, graphite, and turps or wash in various combinations, and in a very free style with strong linear components." 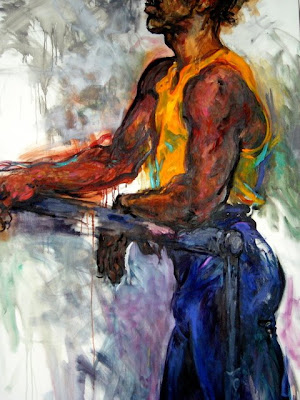 "The classical training I received at the Boston Museum School was based on the precept that good drawing is the basis of all art; hence, drawing everyday. Learning the traditions and techniques of the masters – anatomy and perspective; the grinding of our own pigments; preparing rabbit-skin glue, gesso and old painting mediums; stretching, sizing, and priming of canvas; laying of gold leaf; fresco painting – contributed to my love for the traditions of the past, and simultaneously, a struggle to break away from them." 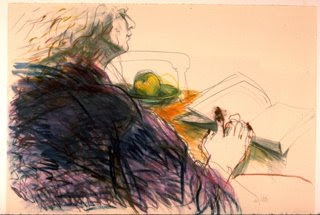 "Raw edges, the feeling of life and process which exist in an unfinished study; the use of space in which the silence – that which is left unspoken – is allowed to manifest itself as articulately as the completed image – these have become basic elements of my work. The medium and techniques used vary, but most of my work itself deals with the abstract essence of the human form and with its poetic interpretation." 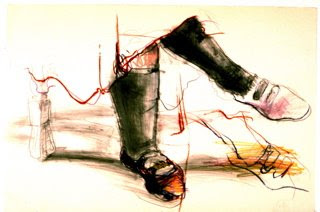 Judith has exhibited widely including Butler Institute of American Art, Youngstown, OH; Maier Museum of Art, Lynchburg, VA; National Academy of Design, NY; J. Rosenthal Fine Arts, Ltd., Chicago. She has a large body of work currently on view at the Berman Center, a women’s health and wellness facility at 211 E. Ontario St. in Chicago. Currently an affiliate member of ARC Gallery, Judith is represented by the Maple Avenue Gallery in Evanston, IL, and Morpho Gallery in Chicago. 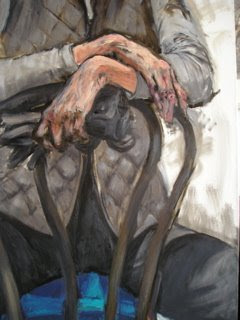 Thank you for sharing this article with me. You have a great studio and are so lucky to be able to create such gorgeous work! Linda D.

I love Judith's figure drawings and am blown away by them. I wish there were more figurative art shows and shows with drawings of all kinds to go see.

Judith Roth renders the intriguing Earth-wise mood of her subject by portraying a partial or entire figure with highly perceptive expertise.
Her captivating style enlivens a viewer's curiosity and encourages participation. I greatly admire her powerful use of radiant colors made indelible by combining them with electrifying linear graphics.
Biz Oregon Elly Varga (Cummens)

It was 1995 and I had just moved back to Chicago from NY. On a random Friday morning, I attended a church bazaar nearby in the SW Suburbs wanting to only "look" for something to add to my home here, since everything I owned was still back east. As I walked in, there it stood against a wall; a most enormous and beautiful piece of art. A woman drawn in charcoal. She was beautifully framed and signed by Ms. Judith Roth. The attraction was immediate and I almost stumbled over a table to get to it before anyone else did. ( I won't disclose the price I paid.)
It was framed at Judith Roth Studios and there was a telephone number on the back. I called and left a message, and Judith called me back when she returned to town. I told her that I was wondering of the value of this work of art that hung on a large wall in my dining room. I was quite surprised to hear what Judith had to say of this now rather valuable painting I owned.
It's an amazingly simple piece of work. A pensive lady with pretty long hair and an angelic face, head leaning on one hand with downturned (closed) eyes.
I am still thrilled to have this in my rather extensive collection of art as I have gone to light it overhead for more emphasis.