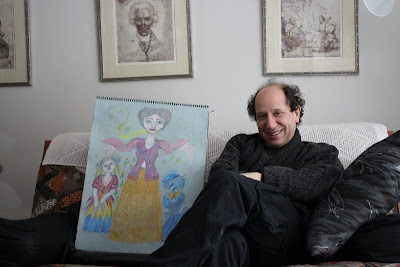 I drove to Evanston to visit Bert Menco, originally from the Netherlands, at his residence / studio, where he creates his drawings, paintings, and art for printmaking. Located in a quiet neighborhood, with signs indicating which side of the street to park on depending on the day, his Bauhaus-inspired condo building was designed by architect David Hovey and built in the mid-1980s. When I arrived, Bert had been working on a drawing he has tentatively named The Singing Siblings (a protective mother and her two daughters), which he created used pencil and colored pencil on pastel paper. He prepares many of his drawings in his cozy living room, which has sliding doors, and with the drapes drawn, you have, at this time of year, a partial view of his snow-covered yard with a wooden fence in the back. 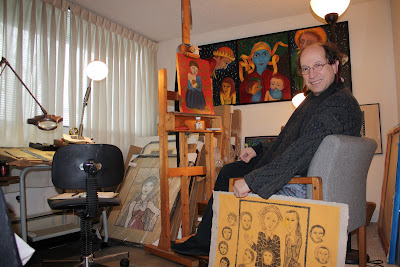 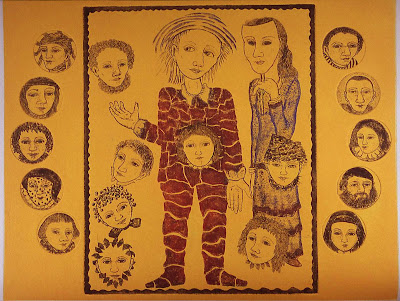 Upstairs in his 140-sf studio, including a drawing desk, storage area, drawing / painting easel, small table, lamps, and chair, Bert works on paintings and plates for printmaking. He uses the easel for his oil paintings, and the drawing desk for his plate making, which involves using a magnifier, metal tools, and metal plates. His intaglio printmaking includes etching, aquatint, drypoint, and mezzotint techniques. For some of his prints, he has been known to work with 12 to 15 separate plates to create one large image. 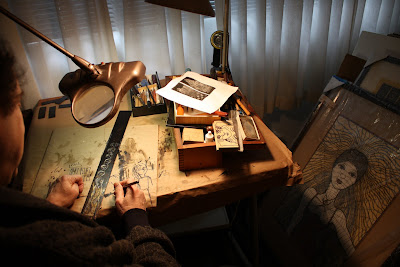 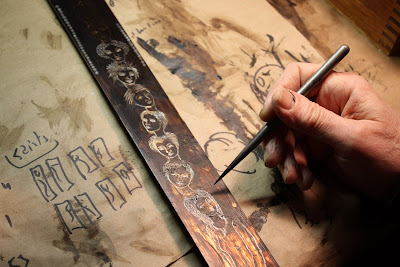 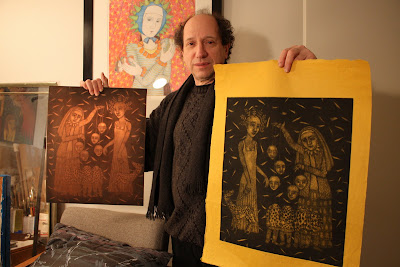 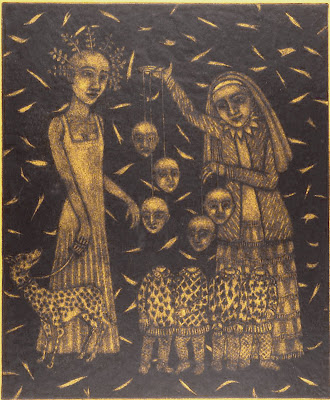 Bert's studio practices: "I use my whole house, more or less, as a studio. I draw in a dedicated studio space as well as in my living room and kitchen. I use my kitchen to 'bite' my etchings, although on a nice summer day, I might also do this on my small patio. I have a drawing table that I mainly use for drawing on an etching plate or for an occasional woodcut. More often than not I draw in my living room, but also when I'm traveling -- trains, sometimes planes -- as is obvious from my sketchbooks. I always work on my paintings in my studio. I tend to work simultaneously on one or more prints (etchings, drypoints, mezzotints, or woodcuts), drawings, and paintings, but finishing each of these can take quite some time, sometimes over a year. When working, I tend to mostly listen to WFMT or classical music, in addition to WBEZ." 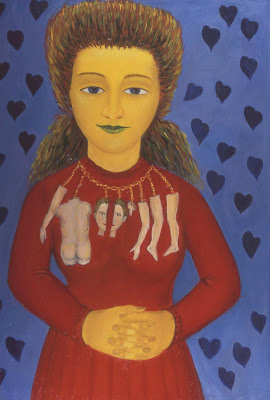 "Although some of my drawings, intaglio prints, and paintings may appear simple, they are actually quite elaborate because it's not unusual for me to spend half a year's work on an image. I draw directly or use small sketches, even doodles, as image-generating nuclei, often combining two or three that appear to complement each other. I rarely use concrete references but rather work from inner visions. I tend to be narrative in my own art, perhaps poetically narrative. I don't see my images as telling a story but rather as reflections of inner feelings, similar to some poetry, and would like observers to read them as such. I like to believe that my work carries a certain mystery. My images are very much 'inside out.' I have usually some idea of what I want to obtain, but much of the image is generated while I draw or paint. The end product always surprises me, and I am often amazed that there even is an end product. Analyzing my own art is difficult, but I think that the dreamlike images tend to deal with confined spaces, which contain certain characters that reach out to one another but do not quite succeed in meeting, a reflection of this precarious balancing act that many of us have to deal with in our lives."

For more about Bert and his art, go to http://www.bertmenco.com.

I've always loved his paintings .... and he looks like such a nice person
Thank you ....