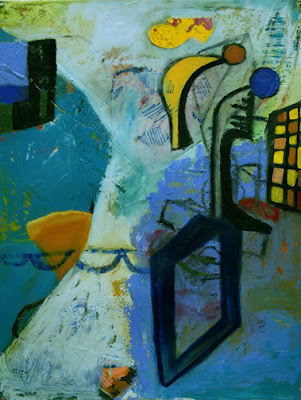 I took a cab to visit artist Sandra Perlow at her studio at State and Monroe, located in downtown Chicago. When I entered her building, I was greeted by a security person and after I signed in, he called Sandra to let her know that I had arrived. Then I took an elevator to the 4th floor, where I navigated a long hallway to find Sandra's unit on the far east end of the building. Sandra greeted me at the door and led me down a 15-ft foyer to a small seating area, where she had some chairs, a table, a computer on a desk, books on shelves, and storage. Another hallway adjacent to the seating area led to a small bathroom and then expanded into a large space with eastern-facing windows at the far end. This room, making up most of the 1400-sf unit, was clearly her creative space with a kitchenette, counter space, two large working tables, an office chair, storage shelves, and her work-in-process hanging on the walls. Sandra said that 50% of the people in the building owned their condos, and the others were renters (she's an owner). She said she likes the space because it's relatively close to where she lives, it's warm, the lighting is good, there is security, it's off State Street, and it's large enough to accommodate her work. 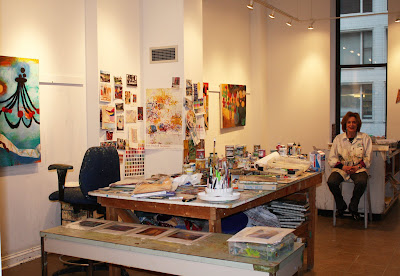 Sandra's studio practices: "I work with collage, papers I have painted, found paper or wallpaper, and mixed media on paper. During the week, I usually come to my studio about 9:30 in the morning and work until 4:30 or so. I check the computer and phone messages. I usually don't put everything away. I like to have layers of things lying on the work space. I also like to have my sketchbook out to get my mind moving. Although I usually work on one piece at a time, sometimes I have two going at the same time. If I'm having problems with a piece, I go to work on another project. For inspiration, I listen to music as well as read poetry. I like to travel and visit different cities -- I like the combination of an old city with new buildings. The markings on buildings as well as layers of paint inspire me. State Street, the Palmer House (hotel), and the way people move on the street stimulate my imagination." 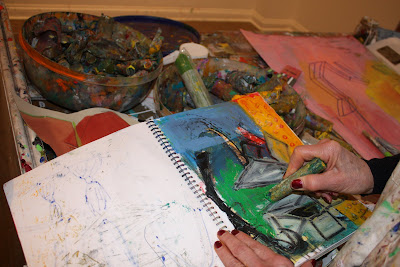 "When I start a piece, I start from a sketch and then go to my drawer of papers and pull out the ones I need and then put everything on the floor along with my canvas or paper. I start to cut the papers and then glue and iron them to the surface. Then I move the piece to the work table and start to use oil sticks and markers. When that's done, I hang the piece on the wall, and then I paint it with acrylic paints. I erase areas and rework them and then erase and add more oil stick, marks, and paint." 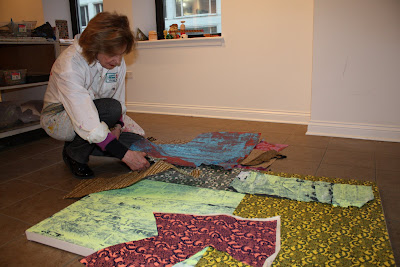 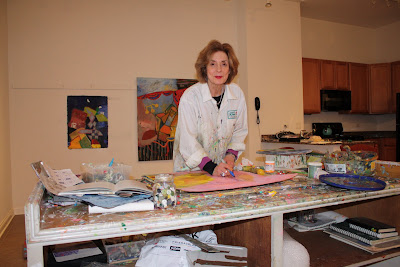 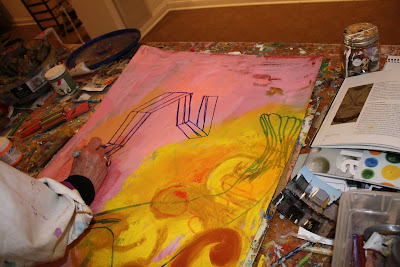 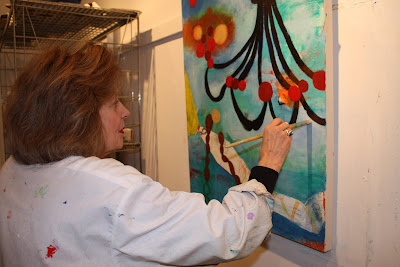 "My new series is about the interior life of the self. Bending Forward (below) -- Lights come to mind in terms of reflecting surfaces as well as reflecting on life and coming to a decision. Your eyes play tricks on you." 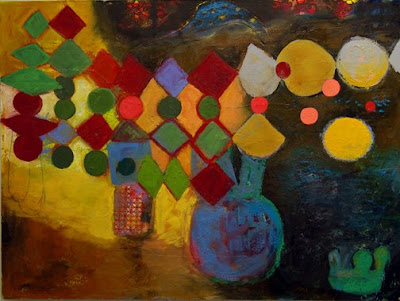 "The new painting on my left (below) is about moving from one place to another, and the painting on my right is about drapery covering a window. I get my ideas from the city -- urban life and architecture." 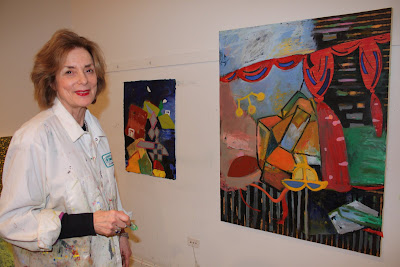 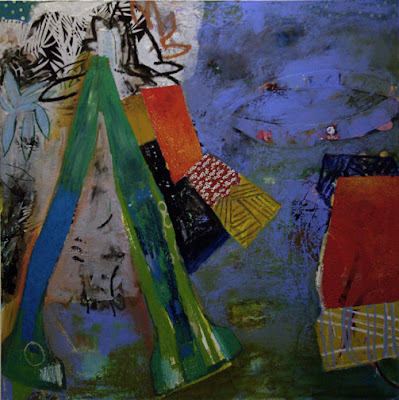 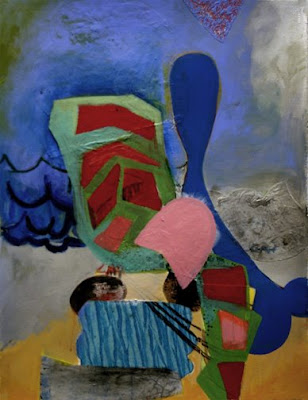 For more about Sandra and her art, go to http://SandraPerlow.net.

I am really enjoying learning more and more about this artist. Thanks so much!