Darrell Roberts was my first art instructor when I started art classes in 2006. The following year, he became one of bloggers for ArtStyle Blog, where his interview appeared in April, 2007. Starting his career as a figurative painter and then switching to an abstract style about ten years ago, he uses thick applications of oil paint mixed with pumice in multiple layers on relatively small canvasses. 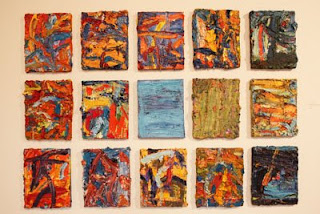 "My current series is based on my walks back and forth from my studio and the path I repeatedly take. Each time with the month of the seasons changing like the wind, I encounter new inspiration. While walking I take photos with my cellphone and email them to myself for continued inspiration while painting. It may be a piece of trash that has blown by, weathered by the elements and faded in color, or it may be a pipe sticking out of the sidewalk with faded yellow paint and rusty browns, or a light blue metal frame of a door way, bent and abandoned, but a beautiful line, color and composition to me. Spray painted gray squares, where graffiti has been covered up make a lovely composition to me. The facades of buildings being torn down, the rubble of bricks and wood in dumpsters to the snow and colorful bits of spring vegetation creeping up through the cracks in the sidewalks inspire my art making daily."

Although he has said that while most of his inspiration comes from nature and the ongoing activity in the city, he is also captivated by the manmade colors of toys and household objects he finds in stores. He tries to recreate the same manufactured colors in some of his paintings, symbolically juxtaposing the natural and constructed elements he finds in his own environment. 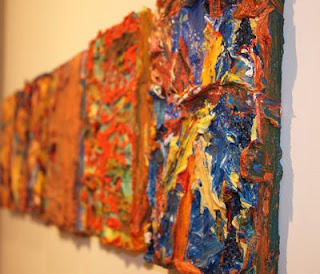 The following is a write-up in the Chicago Connection: The 5 Artists Project catalogue, which was published in August, 2008.

Growing up in Eldon, Iowa, Darrell Roberts has lived and worked in Chicago since 1997. Influenced by art critic Harold Rosenberg and artist Hans Hoffman, he reveals that his painting process is similar to the “push and pull on the growing metropolis” – the never-ending construction and re-building of buildings and roadways in the city. He started his profession as a figurative painter and then found more enjoyment as an abstractionist.

Working with small canvasses (usually 12” x 12”), he uses oil paints mixed with pumice to build layer upon layer of color, lines, forms, and textures. Inspired by construction sites, nature, and found objects, he takes photos daily with his cell phone during his walks through the city. In his studio, he begins painting with a brush and then progresses to layering with a knife, which is also used to apply the paint-pumice mixture thickly. He constructs/deconstructs his paintings and builds layer upon layer of swirling paints in low relief -- sometimes extending to the sides of the canvas.

The colors in his paintings are very vivid and bring his compositions to life. Influenced by colors in his environment, he sometimes tries to duplicate interesting manufactured colors to include in his pieces. When he works in a series, which he usually does, and arranges the paintings side by side, one immediately senses a lyrical cohesiveness of the entire group. The pieces are tied together like a compelling narrative of the urban landscape. The conscientious viewer is immediately drawn into the paintings to get a closer look at the layers of paint and to uncover the mysteries that lie beneath.
Posted by Amy A. Rudberg at 6:21 PM