I visited Johannah Silva at her studio in the Cornelia Arts Building, at Cornelia and Ravenswood in Chicago, in the Roscoe Village area. She shares a nearly 400-sf space with fellow painter Darrell Roberts. Located on the west side of the building, their space is divided in half by a north-south wall with a small curtained doorway on the south end. They have been in the space since June, 2008.

Working with watercolor paintings on paper and acrylic paintings on canvas, and more recently oil on canvas, Johannah creates most of her art in her studio and usually sketches nearly everywhere she goes. Her work space is a rectangular room with a small window on the west wall. From the window, there is a view of the El (elevated train) and the courtyard below with snow-covered kilns for ceramics. Johannah hangs her work on nearly all four walls in the space. She has shelving, a desk, shelf space for storage, and two work tables, where she does her drawings. She tends to stand and paint on the canvases on her wall and uses a taboret (portable cabinet) on wheels to hold her painting materials. (Note regarding photos: The paintings on the wall are works-in-progress.) 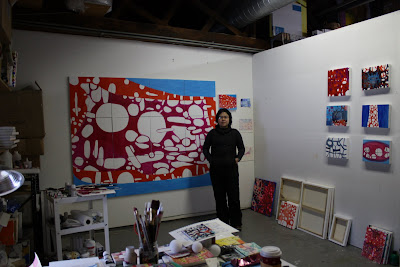 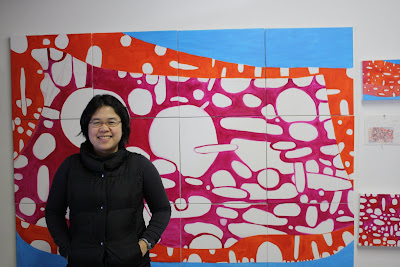 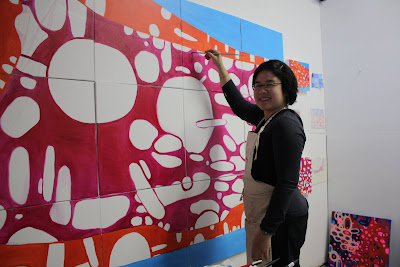 Johannah's studio practices: "My studio practice involves trying to spend time in my studio as much as I can. Because I teach full-time, I find myself going there at the end of the teaching day or in between classes sometimes. I come as often as I can because even just being in the space and staring at the work is part of my working process. It's really difficult to get started again whenever I take long breaks (which are sometimes necessary). I usually listen to the radio (NPR) or put on CD's when painting. Occasionally, I read to get inspired and motivated. Often, I just have to make myself work sometimes, especially during drier or more difficult periods, because it's through the working and doing that I get through these spells." 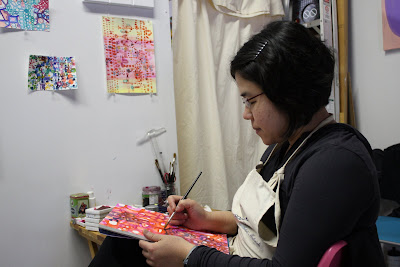 "In the last few years, I have been making work using the circular shape/form as a starting point for my paintings and drawings. The circles allude to micro as well as macro forms -- cells and atoms as well as planetary bodies, for example. My working process involves the repetition and placement of these shapes and marks on the painting surface, in consideration with formal elements such as color and space, to arrive at surprising and discovered compositions that follow an internal logic.

I am interested in theories and/or imagery derived from physics, chemistry, biology, astronomy and geology, and in philosophical and spiritual notions regarding concepts of space and time, being and nothingness, internal mind and exterior reality, as they relate to our place in the universe. Thinking about these things influence my work although the end-result is ultimately arrived at through a personal and intuitive working process." 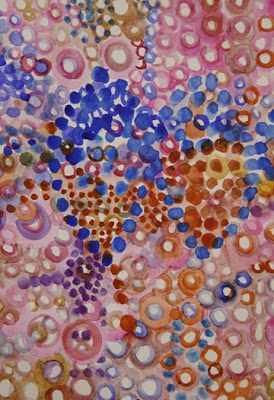 For more information about Johannah and her art, go to http://www.johannahsilva.com.